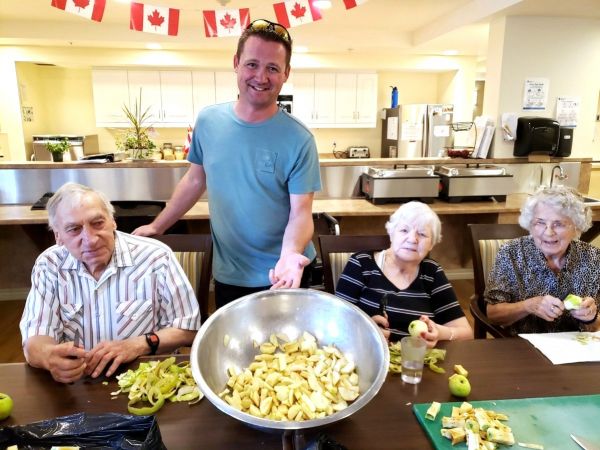 A huge basket of backyard apples and a super-sized zucchini contributed to some tasty treats recently at Points West Living Red Deer. And a willing group of residents did the work required to transition the fruit from garden to table.

We decided to make apple crisp

“We had quite a large group join together to peel, slice and dice the apples. We prepared 26 cups of apples to be made into crisps. It was almost enough for all cottages to get a special treat of homemade apple crisp,” once the workers themselves had enjoyed a taste of the fruits of their labour.

If I knew you were coming...

While the rest of the residents dealt with the apples, residents Joyce and Don Lancaster tackled the large zucchini. As Don read off a recipe for chocolate zucchini loaf, Joyce measured out the ingredients. “Finally, Don mixed it all together, letting everyone know that, ‘Every lady around the table should take note that a man is baking a cake!’ The two of them even sang ‘If I knew You Were Coming I’d Have Baked a Cake’.”

“We shared lots of laughs as we baked that afternoon,” says Delray. While they waited for the treats to bake, laughter continued as the group watched a Red Skelton comedy show. “It was a great day to show not only the fruits of our labour but the fruits of Eden. All were joined in community working together.”

The following day, the group made 50 cups of apple pie filling, in preparation for Thanksgiving celebrations coming up in October.

Photo: (from left, seated) Residents Lloyd Lyons, Carren Dzuba, and Joyce Lancaster contribute to the big bowl of peeled and diced apples held by Kim Lydom (standing). Kim brought in a huge basket of apples which were turned into delicious apple crisp and shared throughout the PWL Red Deer community.