Girls bring their hearts to craft time with residents 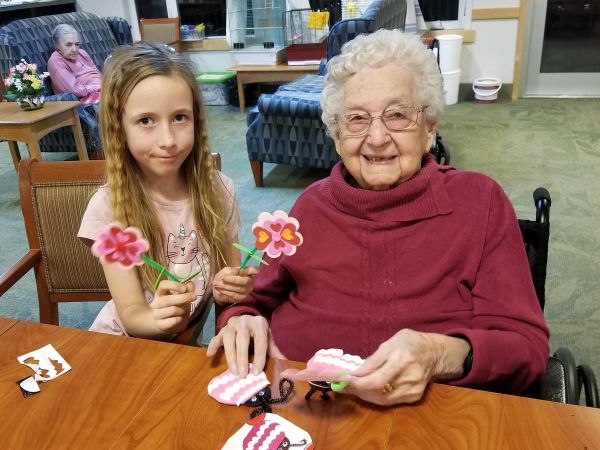 It’s the season for love and hearts, and homemade valentines. Residents at Points West Living Stettler had a wonderful time, hosting a group of young girls, ages 8-10 for a heart-filled craft time. Each girl was partnered with a resident for the craft, and each pair created together.

“I found these adorable foam Valentine crafts in the dollar store,” says Recreation Therapist, Lisa Smith, “and thought how much my two youngest daughters and their friends would enjoy making them. Then I realized how much residents would enjoy them too, and I arranged to bring the two groups together.”

On the evening of February 4, fourteen residents gathered in the Meeting Creek Dining room, leaving seats between them so the girls could join them. When the girls (and their mothers) arrived, two different families were surprised to discover they knew two of the residents. One was the great-grandmother, and another was a family friend who had just moved in.

“The smiles and joy seen on the residents and girls faces was priceless, as they realized they saw familiar faces,” says Lisa. “Also, one resident brought his visiting family to join in the fun.”

After introductions and a bit of instruction, the girls were assigned specific tables, and each asked the residents which of the two crafts they wanted to make, and gathered the supplies. “By assigning each girl to a resident,” adds Lisa, “I found the interactions to be more meaningful and engaging, bridging the gap between generations.”

“The children brought joy and companionship to the activity. Kids and residents assisted each other making the crafts, and residents were engaged in creating and visiting,” says Lisa “That’s what Eden is all about; getting rid of loneliness, helplessness and boredom.”

More photos at Flickr: Girls bring their hearts to craft time with residents