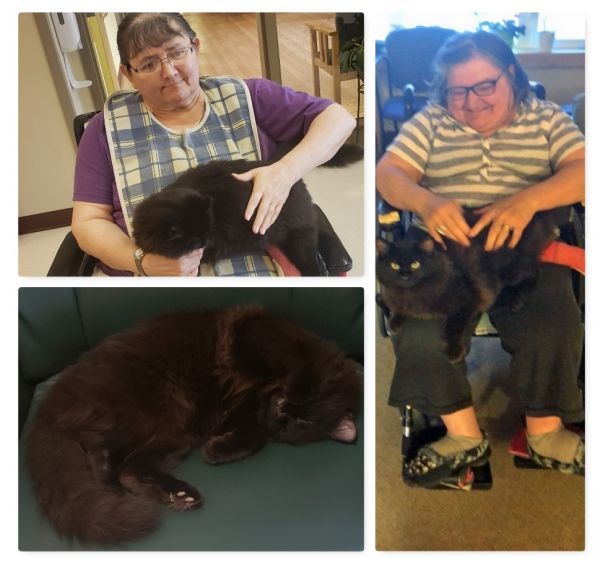 A young and wounded stray kitty is living like a prince at Points West Living Lloydminster. ‘George’, as he’s been fondly named by residents of Yellowbird Cottage is technically still being fostered for the SPCA. But he has become so entrenched in the hearts of all who know him it’s likely he has already found his forever home.

George, named P. Ditty by the SPCA until residents corrected the unfortunate moniker, was found on the side of the highway with a broken leg and surrendered to the SPCA. He was patched up and during his convalescence, the SPCA allowed PWL Lloydminster to foster the six month old kitty.

Residents in Yellowbird Cottage have been angling to get a resident cat for some time, and they embraced George with open arms. “We all kick in to feed him and clean his litter,” says recreation coordinator Rose Baranek. “So far it seems to be going great. He couldn’t be more perfect for our residents. He has brought lots of happiness to some residents and care partners. The few that are not a fan aren’t bothered by him. I am not a cat lover, but he got me!”

“He is fitting well into our community,” agrees Allyn Andrews, general manager. “He likes to be lazy and cuddle and he learned very quickly which residents welcome his company in their rooms.”

George had his cast off and was neutered on Monday March 9, with a follow up appointment with the vet scheduled next month. That’s when the big decision will likely be made.

Adoption is on the table

“We are strongly considering adopting him,” says Allyn. “Residents have grown to love him, and separating them would be difficult and extremely saddening. I’m sure that’s a discussion that will happen in resident council.”