Unexpected parade of Pipes and Drums is a Canada Day highlight 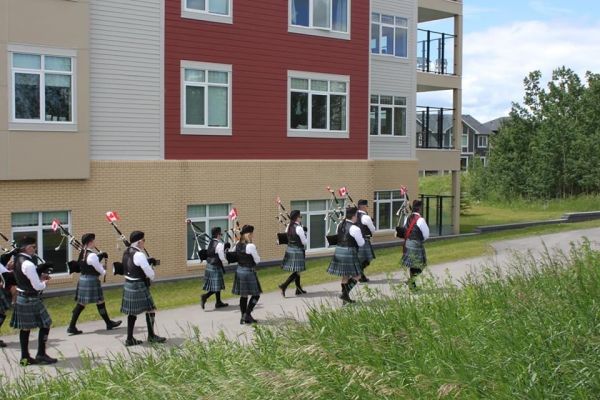 Residents of Points West Living Cochrane were settling in for a quiet afternoon celebration of Canada Day on July first when the thrum of drums and wail of the pipes announced the unexpected arrival of the Cochrane Pipe Band. The group marched around the complex giving residents throughout the building front row seats to the parade.

“At first, the band was going to start playing in the parking lot,” says recreation coordinator Dawn Robertson, “but the way the community is situated not many folks would have enjoyed the music. Thankfully Christie Varty, the security guard on duty, escorted the band around to the two courtyards. Several health care aides hustled residents – many dressed in white and red or waving little Canadian flags – to gather on the balconies to enjoy the show.”

"A few residents who were soaking up the sun in the main courtyard got an up-close performance." When the impromptue show was over, residents enjoyed some special Canada Day treats prepared by the kitchen team.

Photo: The Cochrane Pipe Band wears the Ancient Cochrane tartan – and Canadian flags – as they march and play around the building and courtyards at PWL Cochrane on Canada Day, July 1, 2020.

More photos at Flickr: Unexpected parade of Pipes and Drums is a Canada Day highlight