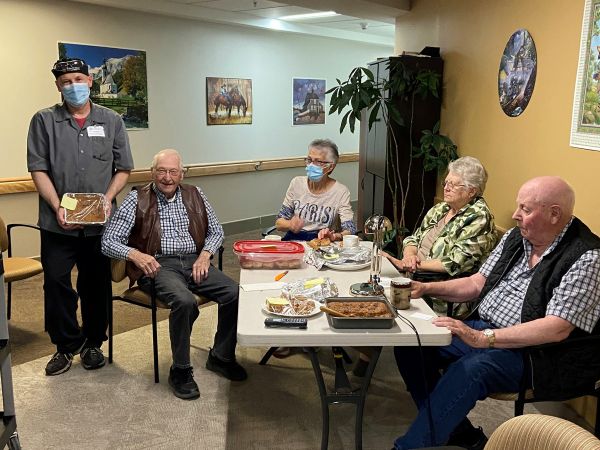 The homey taste of a Snickerdoodle (cinnamon sugar cookie popular in the United States), has shown up as a signature ingredient in things like coffee creamer, ice cream, breakfast cereal, and now, home baking. Independent Living residents at Points West Living Stettler tested the limits recently with a Snickerdoodle cheesecake square bake-off.

“This idea came up when one of the care partners saw an advertisement for the cheese cake square,” says receptionist and bake-off competitor Susan Haustein, “and asked the Independent Living residents if they would like to make a pan and have a contest.”

As you can imagine, the judging positions were filled quickly by some Independent Living residents, along with maintenance man Ken Deleeheer and Chef Tye Feddema. “Our judges took their role very seriously,” says Susan. “They were critiquing every level of the cheesecake squares right down to the fluffiness of the crust.”

Winners received a small gift and everyone left feeling pleased about the event and enthusiastic to try it again.