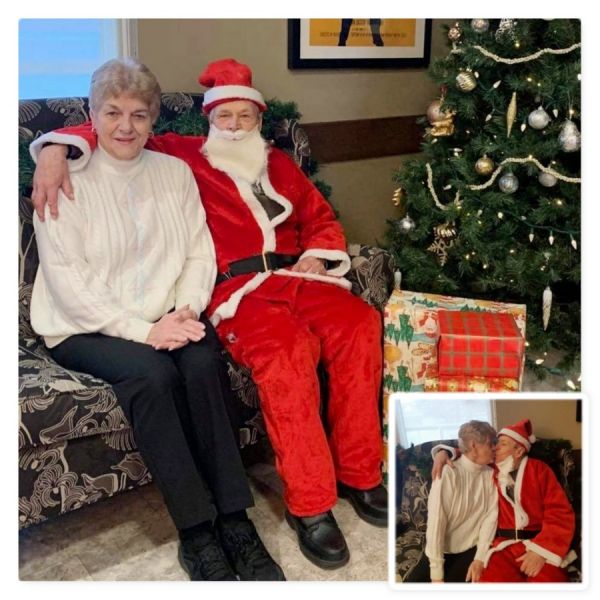 Points West Living Peace River resident Dale Florence was at the right place at the right time to save Christmas for the community. It just involved donning a whole new identity. At first, he was a little reluctant to fill the big man’s boots.

When the scheduled Santa couldn’t join the community’s Christmas party due to COVID restrictions, Dale had no desire to fill in. But after a little encouragement from his wife Simone, and General Manager David Haastrup, he donned the whole suit.

Dale ultimately embraced the role, and had a great time with residents and employee care partners as he handed out presents. He shared laugher and kisses, and got a sweet smooch from Mrs. Clause. According to recreation coordinator, Cathy Mika, “This was the first time in Dale’s 80 years to take on such a mission and he loved every minute of it!”

Lots of carols and singing

The party program started with a short nativity play by some residents and employee care partners called The Christmas Miracle. This was followed by employee care partners singing Feliz Navidad, Jingle Bell Rock, I saw Mommy Kissing Santa Claus, Winter Wonderland, and more. Residents joined in the singing and clapped along to the Christmas carols. Independent resident Anna Nickonchuk and David Haastrup sang a duet of Deck the Halls.

Then, as turkey and all the trimmings were served, resident Noella Fillion played a number of Christmas carols on the organ.

“It was great to see residents and employee care partners coming together to put up a beautiful show,” says Cathy. “Residents were very appreciative and thankful for this.”

Photo: Resident Dale Florence got some encouragement to don Santa’s identity from his wife Simone, thereby saving Christmas (or at least the Christmas party at PWL Peace River).