How the Grinch brightened Christmas 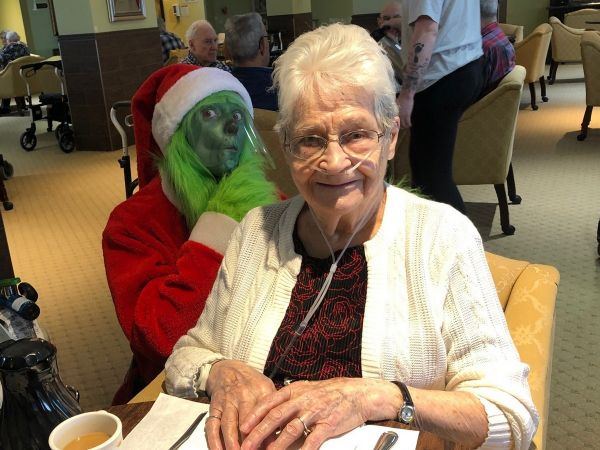 One week before Christmas, residents at Points West Living Moose Jaw welcomed the Grinch into their home. Turns out, her heart was already pretty big, because she didn’t pilfer a single thing. In fact, she visited every resident and had everyone laughing at her antics.

The Window Grinch, as Moose Jaw resident Tristan Johnson-England bills herself at Christmas time, arrived as residents were gathered in the dining room enjoying lunch. She moved from table to table chatting, posing, and joking with residents.

“She made the residents laugh by doing funny impressions and little skits and noises that the Grinch would make,” says General Manager Jennifer Montgomery. “Residents were really into it and you could see the anticipation as they were waiting for the Grinch to come visit their table.”

“Some mentioned to me later that it was fun and better than having Santa because she walked around and did some funny moves and sounds. I think they just appreciated having something extra in their day.”

The day was also PWL Moose Jaw’s 'Christmas Sweater day', and with the Window Grinch’s Santa suit and green skin, photos of the event are particularly colourful and festive.

Photo: Even though the Grinch is being sneaky, resident Violet Martens knows something’s up, at PWL Moose Jaw on December 17.

More photos at Flickr: How the Grinch brightened Christmas