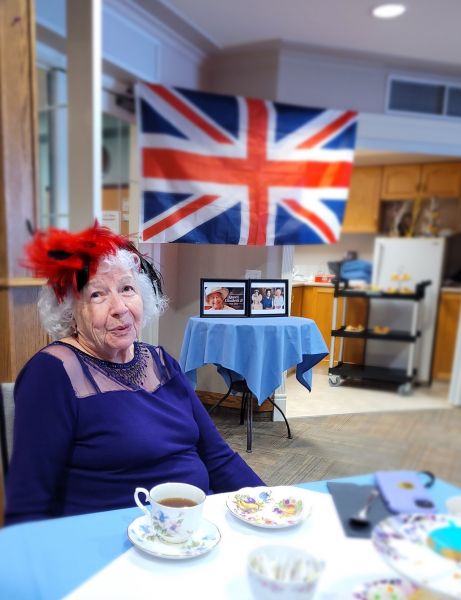 When the residents of Points West Living's Athen’s Creek in Penticton learned of Queen Elizabeth II’s passing, resident Carol Rowely, suggested that they throw a High Tea in the Queen’s honour.

On the day, Carol, along with residents Pauline Freeborn and Joan Guy,.helped to create a corner display in the upper lounge of the Queen’s photograph next to a British flag.

Since Office Administrator Ellie Bertrand had never made tea in the pot before, at the last minute.one of the residents volunteered to to teach her.  The recipe was a hit and the Red Rose tea received many compliments.

Thirty residents all gathered to sing God Save the King, in recognition of King Charles. The residents sipped tea from bone china teacups, of course! The Athens Kitchen was asked to provide the high tea treats and they did not disappoint.

The pastries included mini raspberry and lemon cakes, shortbread, tea scones, and bird’s nest cookies. Afterwards a group of residents handwashed the cups and helped to clean up.

A family member contacted the local newspaper who ran a feature photo of all the residents honouring the Queen.

The high tea was a wonderful way for the residents to reflect on the late monarch, and give back by creating a memorable afternoon for themselves, for others, and in memory of the ever-present Queen II in their lives.