In Memory of a Brother 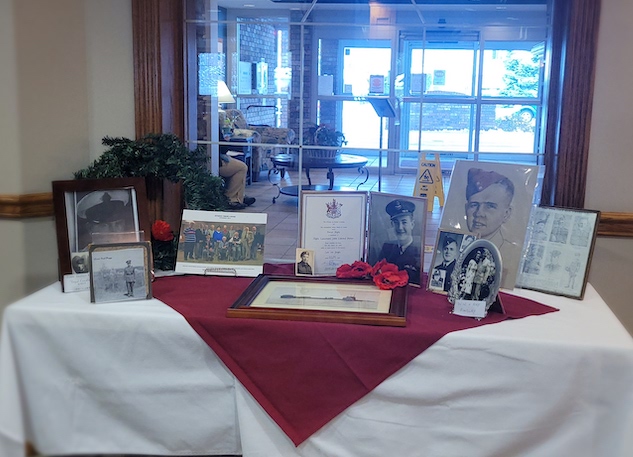 On Remembrance Day the residents at Points West Living Athens Creek Penticton remembered all the young men who have fought and died and all those who survived. The following is a poem by resident Audrey Ross whose brother Jackie was a bomber pilot in World War II and was killed.

Remembrance Day
I watch the services on TV now
November’s chilly wind seeps through old bones
Each year there are fewer old vets on parade
And those who last year marched, if still alive,
Are now consigned to chairs or lean on canes.

They wear a bright red poppy in their hats
With medals proudly pinned upon their chests
I look at wrinkled faces and I see
The boys they once were, setting off to war.

Now they march as best they can, or sit
Their gnarled hands clasped together,
as they all remember fallen comrades.
Some have memories so painful
They are never spoke of, but some
Remember victories, their friends and pretty girls
Who welcomed them as heroes.

As I watch, the tears well up.
I am glad I am alone,
So I can weep for my lost brother Jack
Shot down in August 1944, and buried
In the small French cemetery of Boult-aux-Bois

Six of his crew lie with him. Two escaped, one taken prisoner
The youngest, Danny, hidden by the villagers, returned to Canada.
He came to see my parents often and
We heard the story of what happened on that night.

Remembrance Day! I hope it will become just that
A time to honour and give thanks
To those served and those who gave their life;
When war is ancient history -  a folly from the past
Before we learned to live in peace
And settle animosities with healing words
Instead of wielding swords.